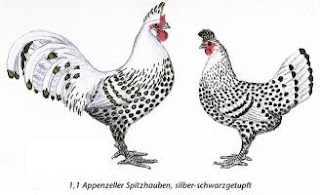 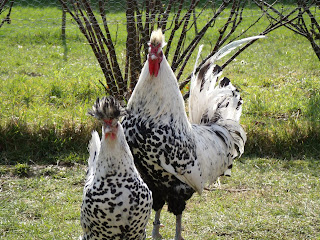 From the slopes of the Swiss Alps comes a very hardy little chicken with a rather unique look, the Appenzeller Spitzhauben.  It was bred in the 15th Century to survive the harsh mountainous environments of isolated monasteries whose communities required a breed that could fend for itself quite well – foraging along the rocky slopes; be a fairly productive layer as well as a tasty table bird; and be able to survive the harsh climate without too much difficulty – no large combs or wattles to freeze.

The Appenzeller Spitzhauben is ideally suited to life in the mountains as they are excellent climbers especially on steep rocky ground and can fly well, often making nests and roosting in trees.  They are even known to have stayed in the trees throughout winter.
They are active foragers, constantly being on the move scratching the rocky ground for insects and tidbits of greens.  Hens are early layers capable of producing plenty of medium-size white eggs on very little food thus making them ideally suited for free range systems.


They are often said to be a “flighty” bird, nervous and high-strung but in fact they settle well with regular handling and contact. Appenzellers are intelligent and do prefer very little interference.   They are as independent as chickens can be. If confined, Appenzellers need a very high fence or a covered pen, since they are known to be able to fly very well.

The head of the Spitzhauben is what gives it its unique look. It is of medium size, held high, with a pointed crest bent forward similar to the traditional hats the ladies in the Appenzell region wear, thus the name Spitzhauben, German for “pointed hoods”.


Both male and female Spitzhaubens have an almost walnut-shaped, rounded body. Their breasts are full and carried rather high, like a soldier when at attention. Backs are of medium length - males slightly sloping while females almost horizontal. The Spitzhauben’s wings are rather long and are carried close in to its body; tails rather full, well-spread and carried at right angles to the back.  The wattles are moderately long, yet thin; the white earlobes are of a medium oval size. The birds have strong beaks with a small fleshy knob at the front.  They have large, cavernous nostrils and prominent brown eyes that always seem very alert. The comb is almost like a horn consisting of two small rounded spikes, separate and without any side sprigs.

History of the Appenzeller Spitzhauben
Although there are no exact records for its creation, it is widely believed that the Spitzhauben came about as a result of crossings of Brabanter, La Flèche and Crèvecoeur.
Also mentioned is the possibility of a Russian crested breed used instead of - or with - the Brabanter.  This would probably have been the Pavlovski, a very old crested breed greatly resembling a Brabanter, but having feathered legs.
The Pavloski are probably the ancestors of the Brabanter, Sultan and Spitzhauben breeds as it is documented to be much older and exported from Russia prior to the development of the aforementioned breeds. Unfortunately, we will probably never know as the Pavloski was rare and then basically wiped out during the Russian Revolution and subsequent wars.*

“Abosin in 1895 said: "Pavloski chickens are currently extremely rare. This breed undoubtedly will disappear and probably soon be completely removed from the list of modern breeds of domestic chickens." - Translated from www.komovdvor.spb.ru

Also it is interesting to note the following:

Bruno Dyurengen in his "Poultry" in 1886: "If we compare what they write about these crested chickens - the old writers, data researcher Pallas - you will recognize the native Russian breed (old) crested chickens and they are simiar with all those features that are inherent in our current Sultan (Turkey), Padua (Brabanter) and Holland (Poland), with the only difference is that now we do not recognize the Brabanter (Padua), with feathered legs. But before they had feathered legs in Germany … " - Translated from www.komovdvor.spb.ru

"... researcher Pallas knew that at the time when he traveled to Europe and the Asian part of Russia from 1768 to 1773 - these domestic chickens were already in those countries: namely - silver / white and black-colored / with feathered legs and a golden / yellow and painted black.

Continuing this theme, Bruno Dyurengen in 1906, in his new book, wrote: "As the actual source or mother of the current breed of crested breeds of chickens, considering crested hens with beards, and feathered legs, and its homeland Russia, where [these features] were developed as a means of protection from the harsh climate. … Prominent scholars of this species share this opinion, which confirmed my latest observations in Russia. This is an old Russian chicken, which for hundreds of years is considered to be in Russia and found there yet with all the intended features and colors that we find in our current Sultans, Brabanter and Padua (Polish) chickens." - Translated from www.komovdvor.spb.ru

At first, Spitzhaubens- at that time known "Gässerschnäpfli" or "Tschüpperli” - were kept only by the religious orders; commoners were not given the pleasure of having them. By the mid 16th century, the breed was in the hands of the common farmers and they had spread throughout most of the areas that make up today’s Switzerland. Throughout the wars and upheavels of the 16th and 17th centuries, the Spitzhauben remained primarily a bird of Switzerland, very few – if any – raised outside of the Federation’s cantons.
By the 19th century the Spitzhauben had practically become extinct.  A small number of birds were discovered in the Cantons of Appenzell  and a small breeding effort began.  The breed pretty much stayed within the Appenzell Cantons and it was not until the latter part of the 19th and the beginning of the 20th Century that the breed became known as the Appenzeller Spitzhauban.  Up to this time, they had been known as "Gässerschnäpfli" or "Tschüpperli” or “Tyrolerhühner”.
The breed flourished for a few years, but after World War II, the numbers declined so drastically that they almost disappeared for good.
In 1953, Kurt Fischer, a German poultry fancier, imported to Germany Spitzhaubens representing the three colour varieties that remained.

Mr. Fischer ensured that the Appenzeller Spitzauaben varieties were included in the German Poultry Standards, thus preventing the breed’s loss to the Poultry World.  Through dedication and hard work, the breed was revived and colours re-created.  German breeders are credited with the creation of the Blue and Chamois Spangled colour varieties Spitzhaubens
The Dutch are credited with creating the Barred and the Lemon Spangled colour varieties.
Originally the Spitzhaubens could be found in ten colour varieties, but today the majority are mainly found in two colours, Golden Spangled and Silver Spangled.  However, Black, Blue, self-Gold, White, Chamois Spangled and Barred do exist in Europe, but in North America only one, the Silver Spangled, is found.

Hopefully, with the interest in Rare Breeds, more varieties of the Spitzhauben will make their way across the pond and North Americans will be treated to the colour varieties of this breed. 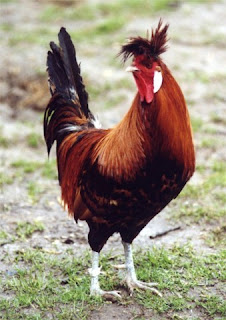 Appenzeller Spitzhaubens were not found in Britain until the early 1970's when Mrs. Pamela Jackson imported hatching eggs from Switzerland.  In 1978, the "Appenzeller Breed Society" was formed catering to both the Appenzeller Spitzhauben and the Appenzeller Barthühner, a separate breed not to be confused with the Spitzhaubens.
Continual importation from mainland Europe through the years has not only broadened the gene pool but has also improved the quality and standard of British birds.  Currently, five colour varieties of the Spitzhauben are found in Britain – Gold Spangled and Silver Spangled being the most popular followed by the Blacks, Blues and Chamois Spangled.


Unfortunately the Appenzeller Breed Society folded in 2001 even though interest in Spitzhaubens continues to grow, especially with the explosion of the back yard poultry movement. Beauty and productivity – what more could one ask of a breed! 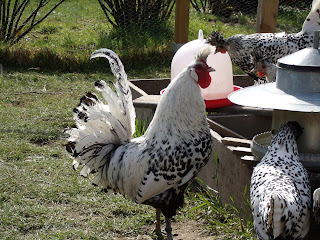 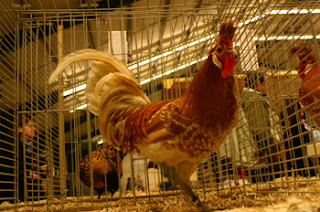 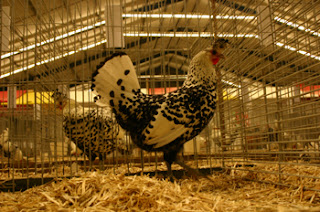 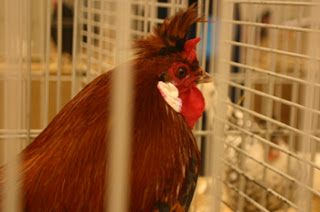 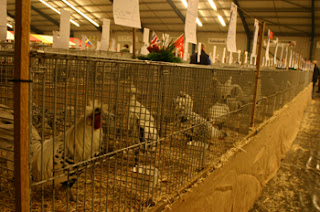 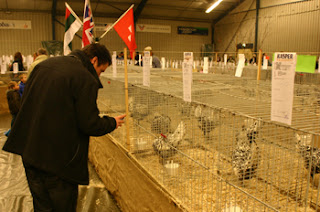 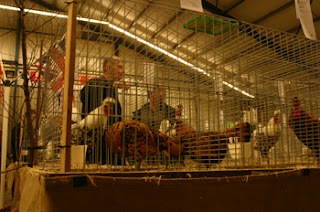 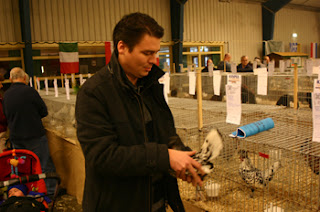 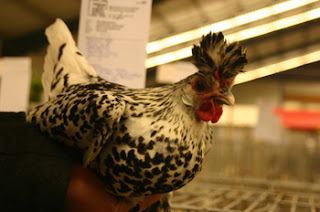 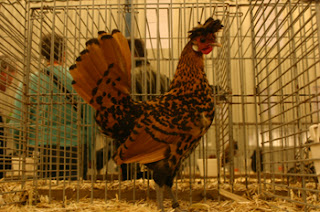 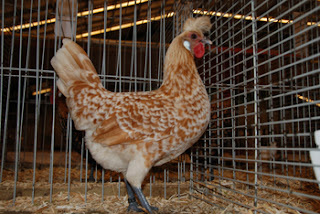 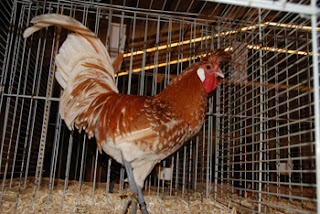 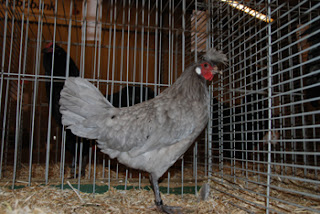 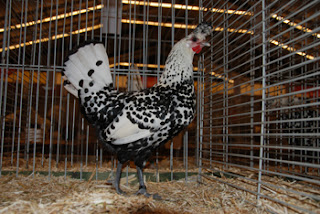 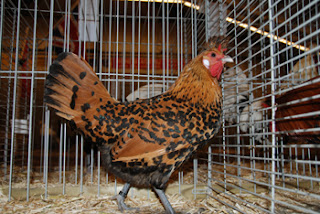 Bantam Appenzeller Spitzhaubens
Herman van Olst (www.spitskuifkriel.nl) , a Dutch breeder is credited with the development of the Bantam varieties. Starting around 1980, he began his breeding program with a crossing of Bantam Dutch Owlbeards (Uilebaardkrielen) with the Large fowl Spitzhauben.  This proved not to be a wise choice as resulting birds were larger than the Appenzeller itself.
The second attempt was a crossing using Dutch bantams and the results showed more possibilities.  For ten generations, Mr. van Olst
concentrated on attaining proper bantam size and an upright Spitzhauben-like crest.  The crest proved to be the hardest property to attain. In 2003, after more than 12 generations of crosses, Mr. van Olst achieved his goal.  At the 2003 NHDB show, his Silver Spangled bantams were recognized by the Dutch Poultry Standards and his Gold Spangled bantams recognized in 2004. 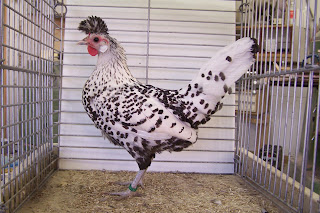 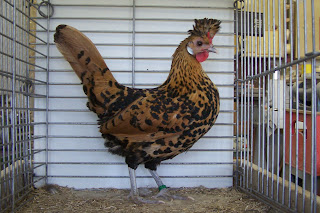 Documentation as to when the first Spitzhauben arrived in North America has not yet been found.  If anyone knows the history of this breed in North America or knows of any sources which might shed some light on this, please contact Cameron at mcattack_ca@yahoo.com

*There is currently work going on in Russia to re-create the Pavloski through genetic tracing and other means.
I would like  to thank Manuela Silvestro for giving me permission to use so many of her photos.  She has a great site that is well worth viewing:
http://www.appenzeller-spitzhaube.com
Many thanks are also in order to Mr. Herman van Olst, the creator of the Bantam Appenzeller Spitzhauben.  Please take time to visit his website at:
http://www.spitskuifkriel.nl
I would also like to thank Dean Shuck for all of his help and for reminding me of the  Russian link in the history of the Spitzhauben. I apologize for any errors made in the translations, be they from Dutch, French, German or Russian. 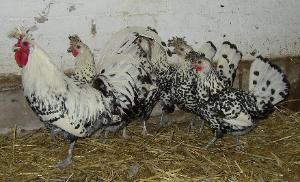