The Huttegem or Oudenaarde Duck – Are We Too Late?

The Huttegem or Oudenaarde Duck is a very old historic breed whose origins lay in the Oudenaarde region of Belgium.
It is said that during the late 1800’s and early 1900’s, it was a very popular duck kept in large numbers, especially along the Scheldt River.  Of its ancestry, nothing is really known although it is speculated that it is a progeny of crosses involving the Termonde duck.
In 1909, British poultry specialist J. T. Brown was visiting the Oudenaarde region and was quite taken with the blue Huttegem.  It is suggested that he was able to secure some stock and take back with him to Britain where it supposedly became one of the ancestors of the Magpie duck.

The Huttegem was originally kept as a laying breed in flocks of great numbers, usually along river banks and streams. The ducks were known for their winter laying ability.  Gradually the farmers, noting that they would be able to raise ducklings to a good slaughter size by Easter, began to use the Huttegem more and more for the production of meat. 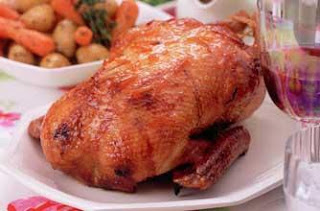 Like Indian Runner ducks and other breeds that have been bred primarily for egg-laying abilities, the Huttegem was not known for its brooding abilities.  The farmers were able to solve this problem by having the eggs brooded by a large local chicken breed, also known by the name of Huttegem. As was customary throughout Europe, animals were often named for their locales, thus you could have several species of the same name.
Huttegem chickens were quite large and known for their broodiness.  The hens could easily sit on a large number of duck eggs and they were also used for rearing the ducklings. As many as fifty ducklings were often placed under the care of just one hen.
Common practice was for the hens to be placed in special cages from which they could not leave. These cages were basically some straw huts or wicker boxes with an open front.   The hen was attached by her leg to a pole. The ducklings, however, could leave the ‘cages’ and go searching for other food, but they would never stray too far from their stepmothers.  Then, when they reached the desired size, they were either placed with the breeding flock or were sent off too market. 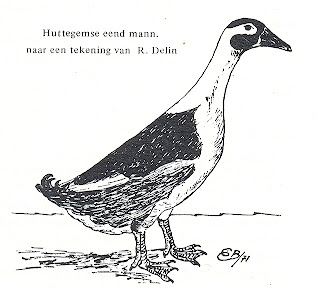 The Huttegem, although an historic breed, was not accorded any official recognition until 1971 when the first Breed Standard was drawn up.  According to the Standard, the Huttegem is a medium-sized duck of about 2 to 2.5 kg. Their body carriage is held in a rather upright position. Even though there were apparently several colors of the breed – black and white and blue and white pied varieties being the most common - only the blue and white pied pattern is mentioned in the Standard. This pattern consists of the neck, the breast and the primaries being white and the rest of the plumage being blue. Birds bred must have head markings similar to those found on the Fawn and White Indian Runner.  The bill colour is slate while the legs and feet are a reddish-orange with black flecking.
The current status of the Huttegem is that it is extremely rare and possibly even extinct. There were a few breeders in the early 1970’s, but as of today, no individual of the breed has been found although hope lay in the possibility that somewhere a few remaining birds are being taken care of in somebody’s small flock.  If so, it is possible that the breed can be reestablished, but currently, it appears that we are to late to save this historic breed; a tragic ending for a breed that is described in almost every historical book on duck keeping all over the world.
If you know of anyone keeping this duck, please contact:
The Association for the Promotion of Belgian Poultry Breeds (neerhofdieren@hotmail.com)
or
The Waterfowl Association 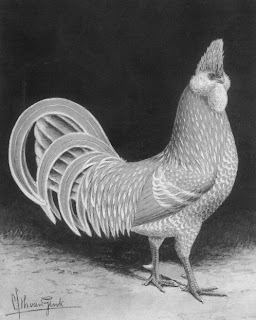 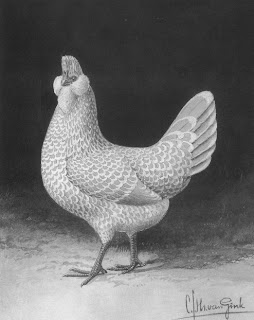 The Brabanter is a Dutch breed of chicken originating in the historic region of Brabant, which straddles Belgium and the Netherlands.

It is one of the oldest breeds of Dutch origin with evidence of its existence dating as far back as the early 1500’s.
Early paintings by done by famous Dutch animal painter Melchior d’Hondecoeter (1636-1695) portrays the Brabanter in many of its original colours.

Popular at one time and appearing in many aristocratic animal holdings, the Brabanter was declared extinct by the early 20th century. It is one of the “re-created” historical breeds having disappeared for a period of time.  The Brabanter received its second chance with its recreation by dedicated Dutch poultrymen by 1920.
The Bantam Brabantar was created by crossing Bantam Polish varieties with Standard Brabanters in the early 1930’s and was officially recognized by the Dutch Standards in 1934.  Both Standard and Bantam Brabanters are considered a rare breed, even in its native region.
The Brabanter has two main distinguishing characteristics: a small tuff of feathers on its head and a beard. The tuft of feathers is somewhat like a round crest that has been latterly flattened inwards from both sides and narrows to the front of the head; in other words making it seem like a Mohawk haircut. The crest is built up from and behind two bright red, cone shaped horns that are moulded like a “V” and are found at the back of its V-shaped comb.  According to the Dutch Standards, the horns of Standard cocks are not allowed to be longer than 1.75 cm. and the maximum length for hens is 1.0 cm.  For Brabanter Bantams, the maximum length of the horns is 1.0 cm.  Unlike some crested fowl, the Brabanter’s tuft does not impede vision in any way.
The Brabanter’s beard is what is known as a three-piece densely feathered, pronounced beard - two lateral pieces and one frontal piece.
It has rather wide nostrils, no chin wattles, and small white ear lobes that should not be visible due to the lateral parts of the beard. Brabanters have orange to light brown eyes that should not be obscured by the growth of the lateral parts of the beard.
According to the Breed Standards, weights for Brabanters are as follows:
(BKU)             (Kippen Encyclopedie)
Standard Cock:   1.9 – 2.5 kg.    2.0 - 2.5 kg.
Standard Hen:    1.6 – 2.0 kg.    1.5 - 2.0 kg.
(BKU)             (Kippen Encyclopedie)
Bantam Cock:   0.9 – 1.0 kg      0.6 - 0.7 kg.
Bantam Hen:    0.7 – 0.8 kg      0.5 - 0.6 kg.
It is considered a lively breed with a crescent-shaped body. Bantams and Standards should have the same basic shape, only difference being in size.
Serious errors in Brabanters include the length of the horns, the appearance of chin wattles, the obscuring of the eyes by the lateral parts of the beard, and the body shape straightening out from a crescent shape.  In the spotted colour varieties – I use “spotted here for lack of a better word as “spangled” does not really describe the patterning nor is there an accurate translation from the Dutch “getoept” - other serious errors are having a “ground” or base colouring too pale, too dark or uneven and the spotting being overbearing, too weak, or uneven.
In both Standard and Bantam colour varieties, hens are said to be good layers of white eggs, even throughout the winter periods. Although not known for going broody, they are supposedly an easy bird to breed with good fertility.
In the Netherlands, the recognized colours of the Brabantars are:

Some of the newer colours not yet officially recognized include:

The Brabantar was once known to exist in the following colour varieties:
Blue White-laced:
Golden Black-bearded [and Black-tufted]
BKU-Club
The BKU-Club was started in 1985 to promote interest and breeding standards of the following Dutch breeds in both Standards and Bantams:
The Brabanter
The Breda Fowl
The Dutch Owlbeard
www.bkuclub.nl
info@bkuclub.nl
Contact Address:
Secretary: Gerard Vermaas
Prinsenlaan 6
NL 3442 CE Woerden
Tel.: 0031-348414813
E-mail: gerard.vermaas@hetnet.nl
North American Brabantars
In North America, the Brabantar is a rare variety and not yet recognized by the American Poultry Association, but there are a group of breeders in North America who are hoping to one day have this beautiful, historical bird listed in the A.P.A. Standard of Perfection. Brabantars are only available in the following colour varieties:
Crème (more like the Dutch non-recognized Lemon Black-spotted)
and
Gold (like the Dutch recognized Gold Black-spotted)
Brabanter Breeders:
Show-Me Silkies & Stuff - Crème Variety
(http://showmesilkies.com)
Brabanters are available in North America commercially from:
Sand Hill Preservation Center – Crème and Gold varieties (http://www.sandhillpreservation.com/catalog/chickens.html)
Ideal Poultry Breeding Farms – Crème and Gold varieties
(http://www.ideal-poultry.com)
As well as other “drop-ship” hatcheries.
Any breeders wishing to list here, please contact Cameron at:
mcattack_ca@yahoo.com