Poultry was once the most diverse group of livestock on the old family farm.  Such farms would have their flock of chickens for meat and eggs, some ducks and geese - valuable for meat and down, and of you would also probably find some turkeys.  Unfortunately, with the dwindling numbers of family farms and the growth of agr-business, the diversity once found in poultry no longer exists.  In fact, in the past century it is believed that nearly one thousand varieties have disappeared world-wide, and of those which remain, many are on the verge of extinction.  Not only are we losing a tie to our past, but we are also losing a valuable genetic pool, so important for species to survive.


With the advent of the large commercial turkey industry in the early 1900's, the various turkey varieties started to disappear from the agricultural landscape.  Today in North America, almost all of the older varieties are listed in the Critical column by the American Livestock Breeds Conservancy.  The two varieties of turkeys developed in Canada, the Ridley Bronze and the Charlevoix, have almost completely disappeared. 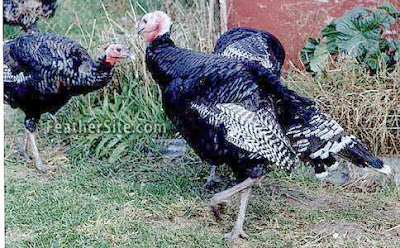 It will take a concerted effort by heritage bird conservationists, government agencies and poultry organizations to save these varieties.  In the United States, a variety which has met a similar fate, is the Nebraskan.
When I tell friends that I find turkeys to be cute, interesting and one of my favourite animals, they look at me with that look that says, "Okay, time for him to be committed to the asylum!" I guess for some people the caruncles and snoods can be a little off-putting or a little pre-historic like, but I think its what gives these birds an aura of royalty. (I must admit, I also like Turken and Malagache chickens - the ones with the naked necks, but more on those in another blog)


As mentioned previously, there are two varieties of turkeys which were developed in Canada, the Ridley Bronze and the Charlevoix.  Of the two, the lesser known and the one I would suggest requires the most immediate attention in order to save it from completely disappearing from the planet, is the Charlevoix.  I first came upon the name of this variety while actually researching the historical origins of another turkey variety, the Beltseville Small Whites.  There, within the list of varieties were seven words which piqued my interest and tweaked at my "ethnocentrism a.k.a. Canadian Pride".

Now that my interest in this variety was  , my goal was to track this variety down and to find out why, in almost all poultry references I had seen, I had never come across this variety.  I got in touch with Margaret Thompson, the Species Coordinator for Turkeys at Rare Breeds Canada, but unfortunately, she had no sources nor information on the variety, other than it was a Canadian Bronze variety developed in the Province of Quebec.


With my limited French - especially in matters  concerning poultry, I scoured French-language websites and blogs.  By chance, at the same time I was searching for information on the Chantecler, and was directed to a Chantecler breeder by the name of Michel Boulianne at la ferme Lescault.  I clicked on the link to his turkey page and to my great surprise, I saw:

Of all the varieties of turkeys, the "Charlevoix Bronze" is the most productive. It is lighter  than the American Bronze with an improved large breast. (I am not sure if he means “less heavy” or “smaller” or both, which it supposedly is) It is a hardy bird that rarely loses its young.  The hens are good layers and the toms do not have difficulty to mate.  The meat is of an excellent quality and taste.


Over a year I have tried to no avail to get in touch with Michel Boulianne to be able to find out more about the Charlevoix variety.  I have heard via various Quebec poultry forums that due to health and other restraints that he has downsized his operation considerably.  This from a person looking for Chanteclers of which he was known to raise exceptional specimens:

So, in effect, the search for the elusive Charlevoix still continues.  If you know of any information regarding this variety, please contact me at:


Also, I want to create a page listing persons who are breeding heritage variety turkeys, both here in Canada and abroad.  If you are interested in having your name, address and/or website listed, please contact me at:

I am not going to go into the history of the turkey here, neither the exhibition nor the husbandry thereof.  For that I recommend joining the following groups:


and, a relatively new group,


the Heritage Exhibition Turkey Thread on the BackyardChickens Forum:


and the Turkey Club UK at: