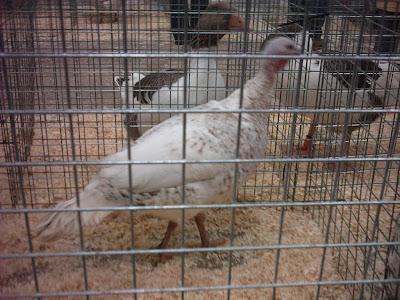 Best AOV (Nebraskan) Turkey Club UK 2007 Show
The Nebraskan Turkey traces its origins to being a mutation that appeared in 1947 in a closed flock of Broad Breasted Bronze. Thirteen poults were hatched the first year.  These in turn provided the basis of a new true-breeding variety named Nebraskan by the originator R. H. Jandebeur of North Platte, Nebraska.
There are apparently three colour strains recognized of the Nebraskan turkey. The Royal Nebraskan, also known as the "grizzled turkey", is characterized by a blending of gray and black, the pattern being broken or uneven. The Nebraska (Nebraskan?) Royal is basically white with black spotting.  Why "Royal" had to be used twice is beyond me and probably led to much discrepancy in the breeding of the pure strains.  The Spotted Nebraskan is white and spotted with any other colour than black, example the Blue Spotted Nebraskan, the Red Spotted Nebraskan or the Buff Spotted Nebraskan.  Since the Nebraskans are really all a result of gene mutations, the ability to breed and maintain "pure strains" was somewhat difficult.


There is a link to an interesting article on the Nebraskan in a 1950's issue of Turkey World at the U.K. Turkey Club site.  It is in pdf. format and can be viewed by going to the TCUK website at: http://turkeyclub.org.uk
Kevin Porter, of Porter Turkeys, has a page on Nebraskans:  http://www.porterturkeys.com/nebraskan.htm


Mr. Porter has also put out an appeal for anyone knowing of any surviving birds in the United States to get in touch with him:
poterturkeys@aol.com  or:
Porter's Rare Heritage Turkeys 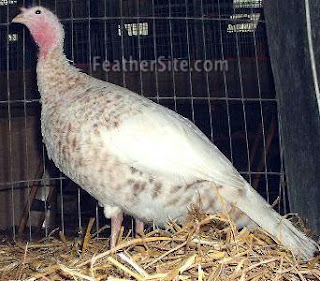 An interesting article on the spotting of Nebraskan variety can be found at:
http://jhered.oxfordjournals.org/content/46/6/285.extract

Sadly, it appears that the Nebraskan Turkey, once popular in the United States, is no longer being raised in its homeland (If ANYONE has information regarding birds in the U.S. or Canada, please contact Mr. K. Porter - contact information above).
From the 1998 SPPA Turkey Census Report:

In the 1952 census there were 16,951 Nebraskans, (but it does not indicate if they were Broad Breasted). Therefore, ever since their surge in popularity in the 50's the old spotted or "pied colored mutations" have been known as Nebraskans. ... A total of 10 hens (3 are blue) and 4 toms were listed by two breeders (1998). They make up less than 1% of the Historical Farm turkeys.

The few remaining birds are being raised in Britain.  From The Birmingham Post, A British newspaper comes this article:

A Midland chartered surveyor has stepped in to save a rare flock of turkeys from death just weeks before Christmas.  Richard Mumford drove hundreds of miles to rescue 30 Nebraskan turkeys from the Roslin Institute in Edinburgh.  Experts at the institute, famed for cloning Dolly the sheep, were going to kill the birds for the Christmas pot after finishing years of research. But now, thanks to Mr Mumford and colleagues from the Turkey Club UK, the animals will spend their Christmas roaming Mr Mumford's farm in Evesham, Worcestershire.

Mr Mumford, who has bred Nebraskan turkeys for four years, said staff at Roslin were preparing to kill the birds for their Christmas dinner if no one wanted to save them.

British United Turkeys originally gave the Nebraskan turkeys to the institute and for the last ten years various aspects of research work have been undertaken on the birds. The Nebraskans helped three students gain doctorates and one student a masters degree. They were studied for their reproductive functioning, feathering and breast blisters, muscle quality and feather pecking.

With turkey research funding at an end, the future of the birds was in doubt, but Turkey ClubUK stepped in and agreed to find homes where the birds would be looked after.

Paul Hocking, of the Roslin Institute, said he was delighted the Turkey Club UK had intervened.

"The line has been a very valuable resource for research into ways to improve commercial turkey strains," he said. "However, the turkey funding has come to an end and it is hoped that sometime in the future we may be able to continue this work. But in the meantime we're glad our turkeys have found good homes.''

"I am delighted that the flock is being conserved, for their value has been proven during experimental trials on turkey muscle quality, nutrition and other aspects of turkey rearing.  Hopefully, this will ensure their availability for future work and I'm so pleased there are enthusiasts maintaining these old pure breeds."

An Article from Another British Newspaper:

WILBUR is a turkey with a mission — to help keep his rare breed from extinction.

Not only does that mean that stag turkey Wilbur can dedicate his life to producing lots and lots of little Norfolk Black Turkeys, it also means he escapes a trip to the Christmas pot.

Wilbur is part of farmer Peter Hayford's breeding stock of rare turkeys at his farm near Diptford.

Next Friday Wilbur will be taking pride of place at the farmers' market in Kingsbridge where he will be helping to highlight the job of the Rare Breed Survival Trust which Mr Hayford chairs.

Wilbur is among 30 rare breeding turkeys on Mr Hayford's farm which includes the even rarer Nebraskan turkey, which are now so few and far between there are none left in Nebraska.

However Wilbur was chosen for the trip to Kingsbridge because of his temperament and his showmanship.

"He is quite well behaved," said Mr Hayford. "Some of the turkeys can be a bit cowed and no one wants to see a depressed turkey stood in the middle of a pen. Wilbur is a bit of a show off and quite happy to be looked at. I will also be bringing a hen with him to keep him company."

The visit by Wilbur is designed as a bit of an Easter special for the popular monthly market which goes ahead in the town square in Kingsbridge.

Wilbur's main job on the farm is to breed new Norfolk Blacks and stay away from the roasting tray.

In fact Wilbur is way past his eating best now, although he is likely to be up to fathering more turkeys for the next decade at least.

Mr Hayford added: "He is more than two years old. He would be as tough as old boots now and no good for eating."

Also on show at the market will be chocolatier Leonie Rees who will be demonstrating the art of chocolate dipping, including how to dip and decorate Easter eggs and Easter bunnies.

John Yeoman, Kingsbridge farmers' market manager, said: "Both the practical chocolate decorating demonstrations and the chance to meet Peter and his rare breed poultry promise to make this market a truly educational and fun experience."

Carol Trant, South Hams Council's business support officer, said: "It promises to be a great day out with the added treat of chocolate. This is a fun way for you and your family to feel reconnected with your food and the local countryside. Teaching children about the seasons and where their food is grown and comes from gives more meaning to mealtimes." 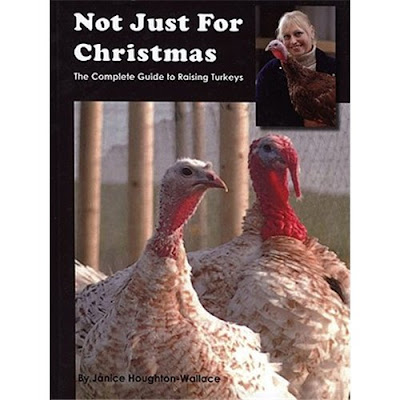 Re: The Status of The Nebraskan Turkey in Britain

"The birds in circulation in the UK in early 2011 all have red pigmented spots.  They are often referred to as Nebraskans but are likely to be Harvey Spotted.  The colour genotype of the Harvey Spot is not fully established but seems to include combinations of b+, cg, r, and na with perhaps other unknown factors, but is thought to not carry the spotted gene sp.  It is possible that some of those that came from the Roslin Institute could be carrying spotted genes but this has not been established. As far as I know, there is only one true strain of Nebraskans (b+b+spsp) in the UK, those that descend from the population established by Carol Harvey at British United Turkeys, and these are being kept at two or three locations in private collections."