Steinbacher Geese
Some varieties of geese were once bred for fighting in Russia and parts of Europe, but unlike their smaller poultry counterparts, goose fighting did not gain a reputation as a “blood sport”. I am not talking about ganders fighting during the mating season or to protect young when they can be somewhat vicious and aggressive.   Rather, traditional goose fighting might be described as “Goose Sumo Wrestling”.  It looks violent, but damage is usually limited to plucked feathers and bruised wings.
The Steinbacher Goose is a fighting variety that originated in the Thuringia region of Germany.

In its homeland, the breed is known as the Steinbacher Kampfgänse (Steinbacher Fighting Goose). What first perked my interest in the Steinbacher was not their fighting past, but that they are one of the few varieties of poultry to breed true in the blue colour variety. Add to this is their rather unique look.


As is evident from the above close-up shot of the head, the most distinctive features of the Steinbacher, other than the pale lavender-blue plumage (blue coloured variety), are its bright orange bill with the serated edging outlined with black, a black bean (at the end of the bill), and an orange ring around the eye, almost giving it the appearance of “wearing black lipstick and orange eye shadow”. The orange “eye shadow” highlights the darkness of the eye.  The head and bill are relatively short giving it a powerful if somewhat mean-looking appearance. The neck is long, straight and graceful connecting to broad, full shoulders with a medium length, broad back, slightly sloping towards the tail. Steinbachers do not possess keel or dewlap and the birds have a relatively upright carriage. They have orange legs and feet.


Not yet accepted by the American Poultry Association, the Steinbacher was accepted into the German Poultry Standards in 1932 where it is found in Blue, Grey, Buff, Cream.
The Steinbacher is the most recent goose breed added to the U.K. Domestic Waterfowl Standards, being admitted in 1997. Steinbachers do not have a long history in Great Britain, probably first introduced from Germany in the 1980s and are found mainly in the Blue and Grey colour varieties.

“There is some controversy over the most desirable paunch for the Steinbacher. It is generally agreed that in young birds, that there be little sign of a paunch. In older birds or females after they have layed, the German Standard specifies a single lobed paunch while the British Standard calls for a double lobed paunch. Since the breed originated in Germany, I would think that a single lobed paunch in older birds would reflect what the original foundation stock possessed. In terms of weight ranges, the German Standard calls for old birds to be in the 15-17 lb. range while the British Standard specifies weights from 13-16 lbs.” – American Waterfowl Judge, Mr. Lou Horton

Steinbacher Geese have an even shorter history in North America, having first been imported in 2004 directly from Germany by Mr. and Mrs. Krebs of Steinbacher Poultry Farm in Michigan (steinbacherfarm.vpweb.com). So far, they are only found in the Blue colour variety in North America.

Although its origins are not well documented, it is believed that the Steinbacher is the result of a fusion of eastern and western varieties of geese; the probable mix being the Chinese, assorted local geese - Landgansschläge (their origins derived from the Western Greylag), and most likely a cross with the Tula, the most famous of the Russian fighting geese varieties. I would hazard a guess that the “true blue” breeding is a result of also  entering into this mixture the Fränkische Landgans, the only other European true blue breeding variety (also German).

Steinbachers have never been bred for high productivity and there is quite a variable difference in egg laying and breeding life amongst the various strains.  The goose can be also quite erratic as far as being broody. However, they are excellent parents and will fiercely defend their young.  If keeping Steinbachers with  other breeds of waterfowl, it is wise to separate them out during mating season, when the ganders become known for their aggressive protection of their mates and subsequent young.


Although Steinbachers were originally bred for fighting, they  are also said to make excellent pets, being confident and affectionate birds with calm dispositions.  They seem to love human contact with the goslings being quite the curious lot. In North America, their rare availability has limited them from filling this niche.   Hopefully, they will become more widely distributed.

Traditional Goose Fighting
The history of goose fighting goes back almost 400 years and was once very popular with the peasant classes of Russia and Eastern Europe.  In fact, until the early 1900’s when it was banned in most of Europe, holding goose fights was almost an annual tradition for small villages and farm communities.  Today, it is still popular in parts of Russia with some rural villages still hosting their annual Goose Festival (a.k.a Annual Goose Fight).  The following is a description of one such event in Russia.

Every year, the people of Suzdal, a small Russian town north-east of Moscow, gather at the Museum of Wooden Architecture, for the traditional goose fight. Locals form a circle that acts as the circle of the fighting ring, and the geese are simply unleashed. Apparently, the colder the winter, the more aggressive the birds. This year the temperatures were way below zero, so the geese started fighting almost instantly. Two families are released into the ring, but only two geese take part in the actual confrontation, with  the rest of the parties doing all the cheering. But this isn’t as violent as it may look. Unlike cockfights or ouzel fights, goose fighting is a lot more gentle, resulting in only a few plucked feathers. 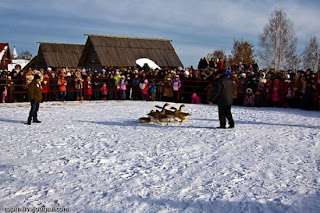 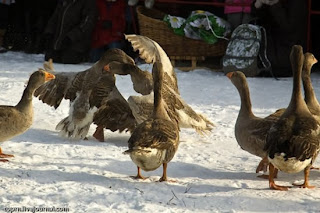 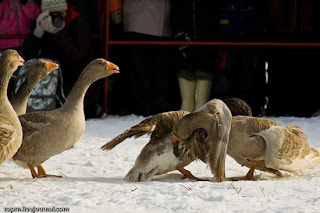 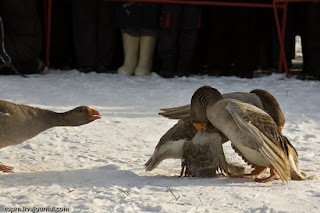 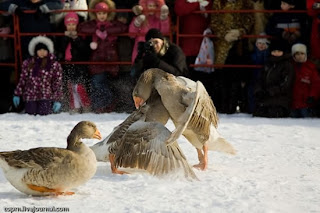 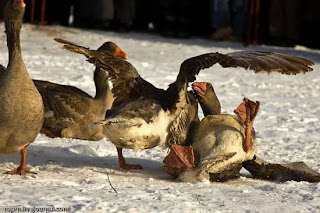 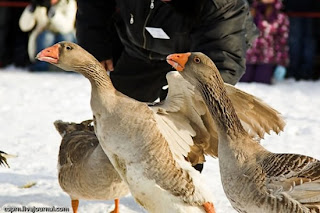 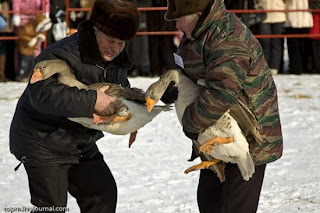 Story and Photo Credits - "Spooky"
Posted by Cameron at 1:07 PM