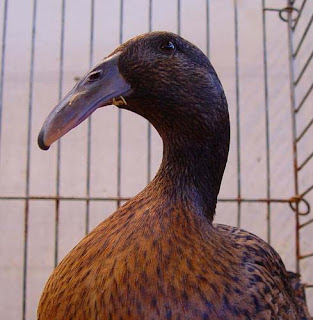 To say that the Dutch Hookbill, (Noord Hollandse Krombekeend) is unique is an understatement to say the least.  In my mind, they rank up there with Muscovies and Indian Runners as the ‘Cool Ducks on the Block’. 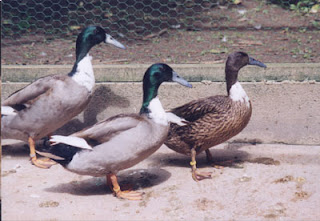 The Hook Bill is characterized by having a long bill that curves downwards from the forehead giving the neck, head and bill a semi-circular appearance; very much like the rounded hook end of a walking cane. 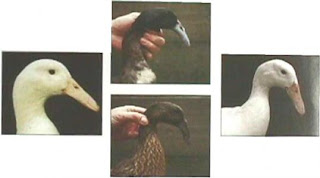 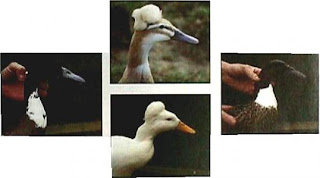 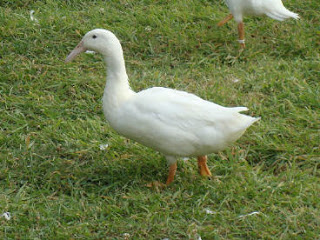 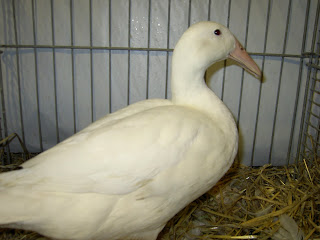 Dusky (females being almost like a the dark coloured Campbells and the males being the flashy dancers with blue bills, green heads and ashy-gray body) and the White Bibbed Dusky (these similar to the Duskies only with the addition of what looks like a white bib on the chest). In Britain, Dusky Blue and Bibbed Dusky Blue are also found. 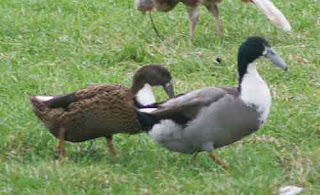 White Bibbed Blue Dusky Hook Bills - German Photo Source Unknown
It is said that they used to be found in Europe in numerous other colours including Black, Black-bibbed, Yellow, Apricot, Blue, Grey, White with Black, and Mallard. 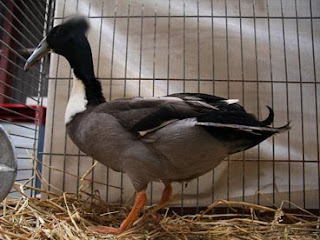 Hook Bills are classified in the Light Duck Category with mature males weighing around 2.5 kg or 5 lbs. and mature females hovering in the 1.25 – 2 kg or 3 – 4 lbs range.  Even though they are good layers of up to 200 blue-coloured eggs yearly and they were once known for their good quality lean meat, their numbers decreased substantially in Europe, especially after the World Wars, so much so that many of the colours that they were once bred in have disappeared. 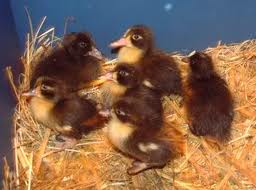 
Hook Bill ducks were once extremely popular in The Netherlands, often being found along the canals.  It is said that the Hook Bill comes from Asia, but like so many of the older breeds, their history has been lost in time.  Documented evidence of the Hook Bill goes back to as early as the late 1500’s and early 1600’swith Dutch and German paintings from these times showing the Hook Bill, often with a crest; not like those found on crested ducks today but rather oval or only being a small tuft of upright feathers.  It is extremely rare to find a crested Hook Bill today, even in The Netherlands. 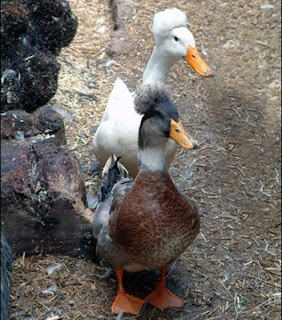 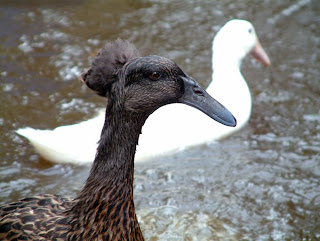 Other documentation providing us with a sense of the Hook Bill’s history is that Charles Darwin wrote about them and is said to have kept a flock on a pond on his estate. 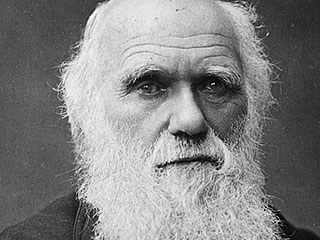 After World War II, only a few Hook Bills remained, mainly in the North Holland region of The Netherlands. By the 1950’s, they appeared to have become extinct. Fortunately, after much searching a few older birds were found.  Through the efforts of a Mr. P. Deeelstra Cornjum (sic?) and a group headed by him, the conservation effort of the Hook Bill breed began. There is now a  waterfowl association in the Netherlands  which is charged with the conservation of this breed (http://www.watervogelbond.be/nl/home) 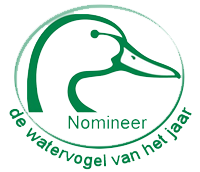 A 2008 census of endangered breeds revealed only around 120 individual birds in Britain, Belgium, Germany and The Netherlands.  In a subsequent survey in 2010 there could only be found 336 living examples of this breed.  As the Hook Bill is part of the history of The Netherlands and not wanting to lose this piece of living heritage, the Dutch Rare Breeds and Animal Foundation (De Stichting Zeldzame Huisdierrassen or SZH as it is known – www.szh.nl)  in cooperation with the aforementioned waterfowl association and various waterfowl conservationists have designed a special program to ensure its continuing survival.

In 2000, Hook Bills were imported into North America by Dave Holderread  (Holderread Waterfowl Farm and Preservation Centre,www.holderreadfarm.com) where they remain a part of his conservation efforts. 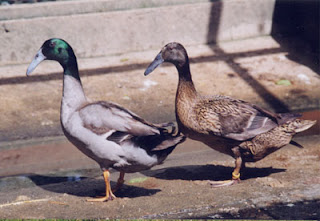 They have yet to be admitted to the American Standard of perfection although in Europe, they are recognized by national poultry federations in The Netherlands, Germany, France and Britain - to name a few - albeit classified as a rare breed.  Over four hundred years of history lay behind the Hook Bill, thus making it one of the oldest breeds of domestic waterfowl.  Hopefully, international efforts to increase breeders and save the remaining colours and bloodlines will assure continuing survival of this unique waterfowl. 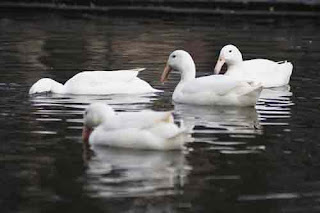 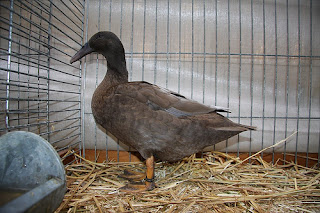