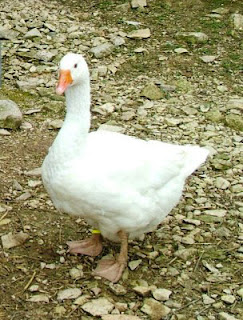 Photo Source: Conservatoire des Ressources Génétiques du Centre Ouest Atlantique
Not too many people in North America know about, the White Goose of Poitou, or more simply, the Poitou (L'Oie Blanche du Poitou), a very old French breed.  It is said that this goose was probably introduced to France from Holland between the 10th and 12th Century (Pierre Metayer, 1934 Doctoral Thesis) although an exact geographical origin has never been determined. It has also been suggested that the Poitou was introduced to the Vienne region of France by Dutch traders and bred for the Dukes of Aquitaine (J. C. Jeremy Hobson). 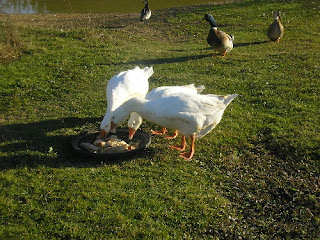 Through the years, specific breeding for plumage growth, snow-white feathers and down, and an early slaughter-type bird created a breed that was an integral part of the goose industry in France.  The birds would be plucked alive, usually four times, before they were slaughtered at around seven months of age, and then plucked one final time.
The Poitou has clear blue eyes and a rather long, strong beak, which is orange when young and a faded orange with pink tip when mature.  Its legs and feet are a dark orange.  Its plumage, as mentioned previously, is a snow-white having no traces of any other colouring.  Goslings are born a uniform yellow. 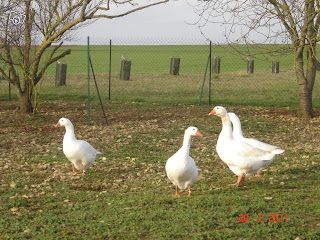 Photo Source: www.leboncoin.fr
The Poitou does not possess a dewlap.  It has a very large, deep breast which had aided in its earlier popularity.  Its back is short and slightly tilted towards the rear. It has a short tail, carried almost horizontally from its body. All in all, the Poitou is a short and compact goose.
Modern Poitou (those not slaughtered for meat) have one or two broods per year with a total of 8 eggs (young  adults) and 20 to 25 eggs (mature adults); each egg weighing in at about 140 to 160 grams.  Average weights are as follows:

Status of the Modern Poitou - Critical 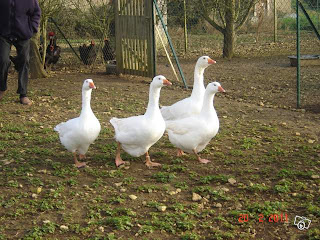 Photo Source: www.leboncoin.fr
According to the Conservatoire des Ressources Génétiques du Centre Ouest Atlantique, there were approximately 300,000 Poitou in 1940.  This number has drastically decreased to the point where the Poitou is on the verge of extinction. A 2009 Census conducted by the Conservatoire revealed a total of 71 living birds - 22 Ganders, 40 Goose and 7 goslings (non-sexed at time of survey). 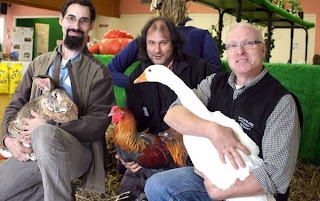 Flemish Giant Rabbit, A Partridge Brahma Rooster and a Poitou Goose
Photo Source: La Nouvelle Republic (17/10/2010)
L'Oie Blanche du Poitou, being such a historical breed deserves attention of conservationists. Through the efforts of a handful of breeders and organizations such as the Conservatoire, it is hoped that the Poitou will once again be established in safe numbers.
“Il est important de sauvegarder nos races locales … surtout l'oie blanche du Poitou, qui tend à disparaître”
“It is important to save our local breeds… especially the White Goose of Poitou, which has basically disappeared.” 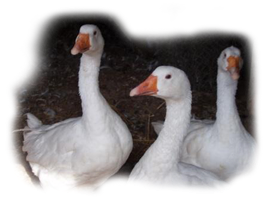